This repository prototypes the fusion of Sentinel-1 SAR and Sentinel-2 optical data time-series for mapping tropical dry-forest disturbance. Since seasonality is the main challenge to map tropical dry-forests, we learn the seasonality pattern in the data implicitly using transformers. The implementation uses Google Earth Engine (GEE) to prepare Sentinel-1 and Sentinel-2 time series data and Tensorflow for deep learning.

The architecture used in this implementation is a siamese arechitecture with transformers used on each branch separately. It requires the data to be prepared as tables of time series values for different spatial locations. The reference data should be prepared as sparse point feature collection as a GEE asset. 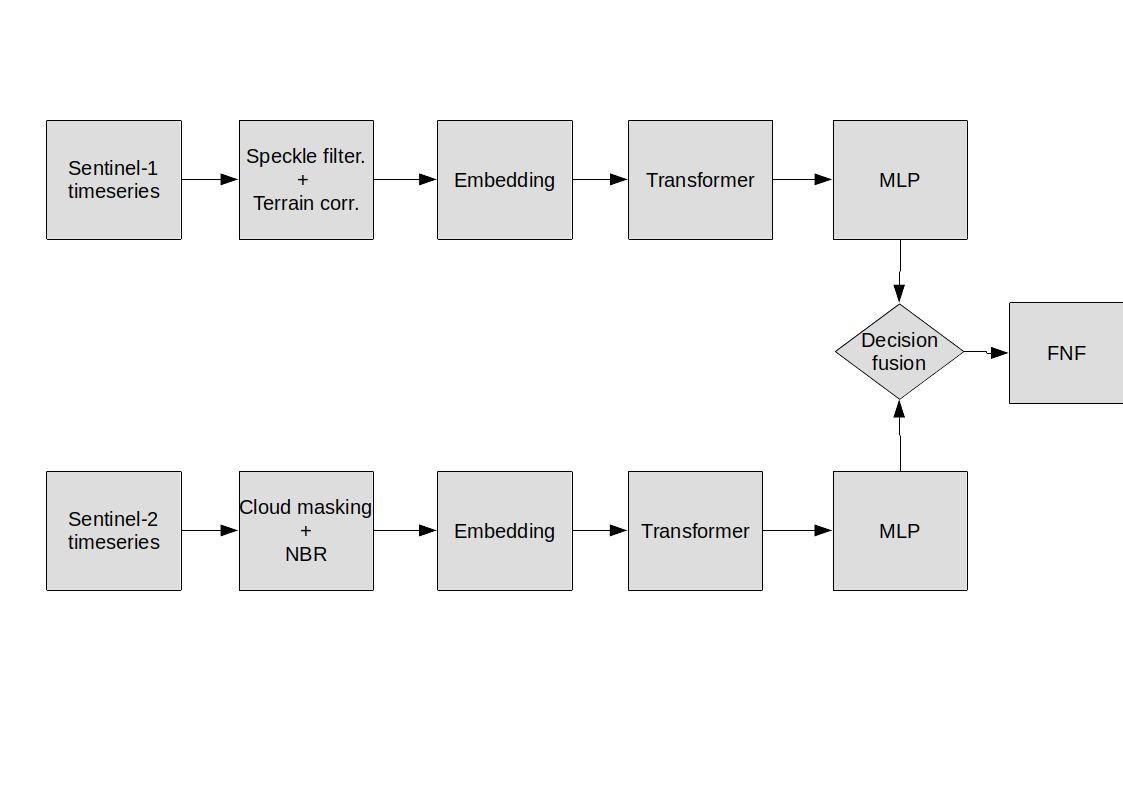 To train a model, the user needs to provide an area of interest in GEE geometry format and run the prepare_data.ipynb first to prepare the training datasets. It is assumed the user has access to a Google Cloud Storage bucket. Time series smoothing using a moving median filter is implemented to smoothen both Sentinel-1 and Sentinel-2 time series. The user can select the smoothing interval in the params dictionary.

The script is provided in a jupyter notebook format. This should make it easier for users to run the code in Google colab without worrying about software dependencies. 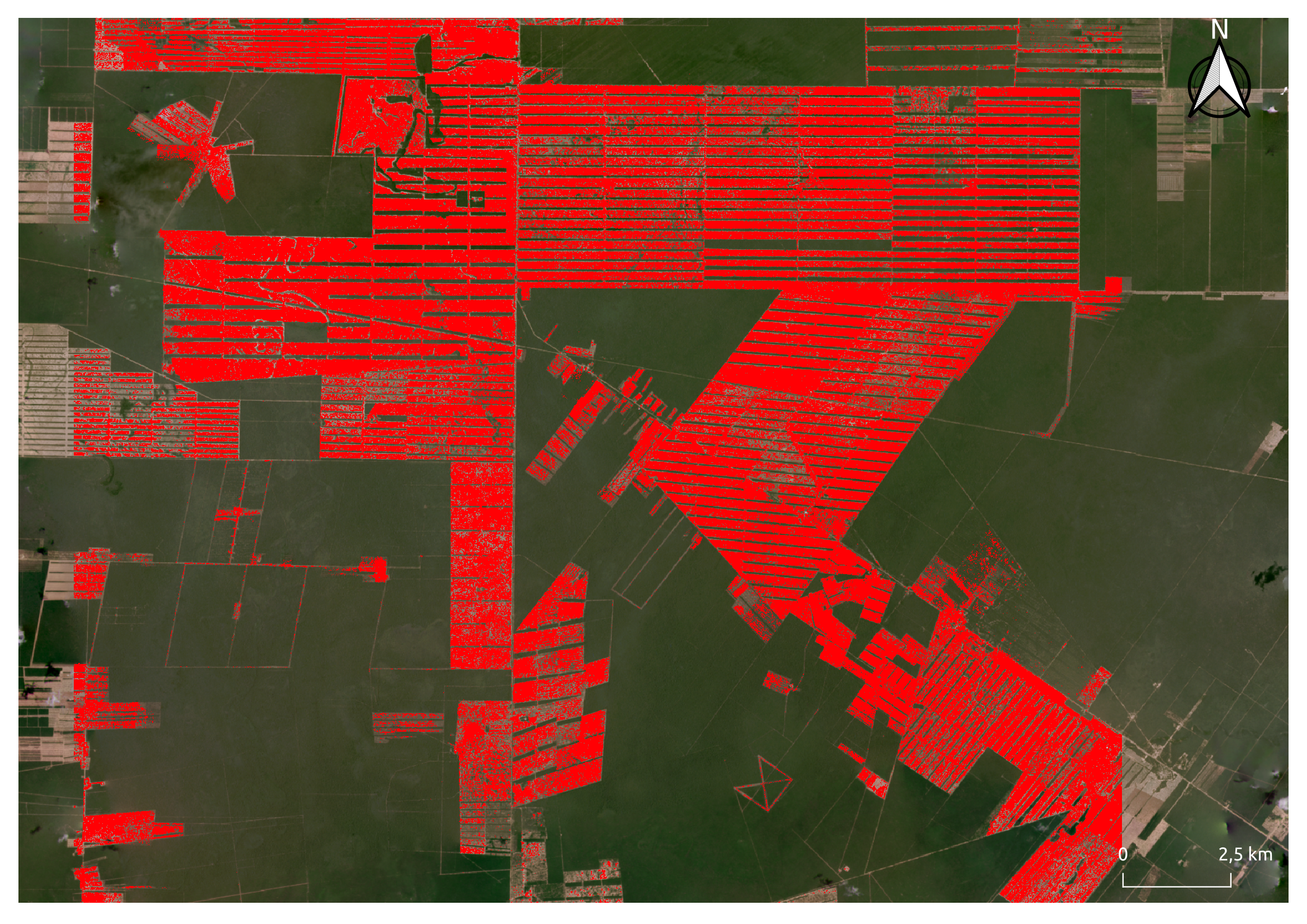 The scripts are written in Tensorflow 2.8 so there may be issues with earlier versions of Tensorflow.

The pytorch implementation for "Forest-CD: Forest Change Detection Network Based on VHR Images" 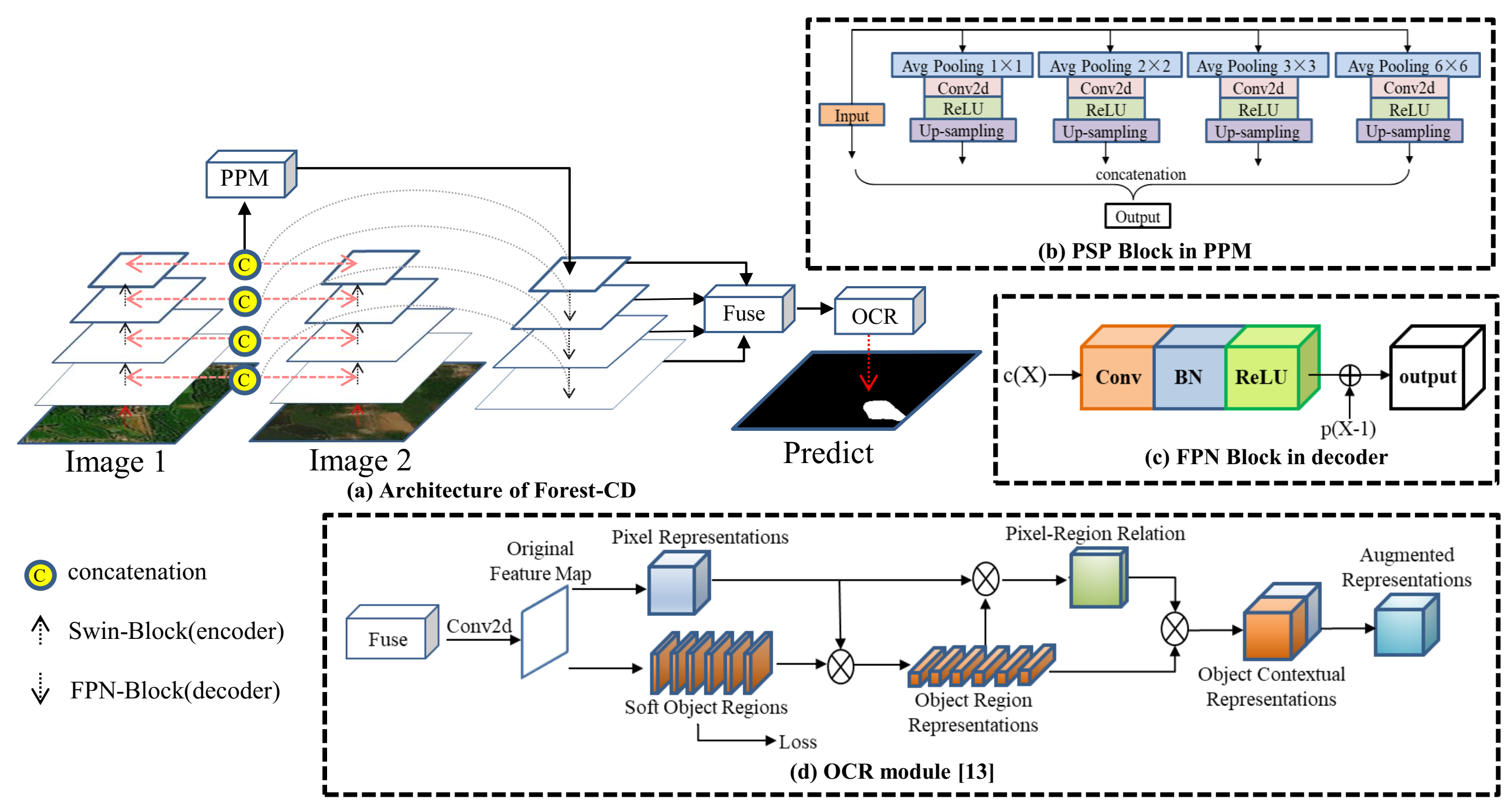 The pytorch implementation for "Forest-CD: Forest Change Detection Network Based on VHR Images". The paper is published on IEEE Geoscience and Remote Sensing Letters.

A TensorFlow 2.0 implementation of the Swin Transformer architecture. Getting Started Everything here is written from the perspective of a Windows user. Steps and commands will be slightly different for other environment

This project is done using Tesseract OCR in python. Tesseract is an optical character recognition (OCR) engine for various operating systems. Using this project one can do various text recognition operations

You can create sound from image files now. Imagine displaying an image from the forest with the actual forest sound in the background–Just adds to the drama. For this to run, have an image file and sound file (in .mp3 format) ready. Implementation of "compositional attention" from MILA, a multi-head attention variant that is reframed as a two-step attention process with disentangled search and retrieval head aggregation, in Pytorch

Build API with ASGI in AWS Lambda with API Gateway HTTP API or REST API, or with Function URL ✨

Dr. Adugna Mullissa is a Radar remote sensing and machine learning scientist at Wageningen University and Research in the Netherlands.

A Python and R blend for processing Sentinel-1 images, getting SAR-based vegetation indices, and sampling raster

This repository contains a pipeline blending Python and R features, first to: download, preprocess, and compute Sentinel-1 SAR vegetation indices (all in Python); following for image sampling in R.

SARfish Ship detection in Sentinel 1 Synthetic Aperture Radar (SAR) imagery Description Note: This program is very much a work in progress, and its ou

Download Anime for free without disturbance from your command line!!!

Project Title This project is for Japanese Anime lovers to easily download Animes without interuption e.g ads Installation Clone my project from the r

This is the python code used for a study on drought monitoring with the use of Google Earth Engine big data. This study is created in the context of my postgrad.

It's just a simple script to add all contest from site to your Google Calendar and make two reminder for them one before the contest one day, and another before half an hour, the event on Google Calendar have the registration link of the contest.

High level cheatsheet that was designed to make checks on the OSCP more manageable. This repository however could also be used for your own studying or for evaluating test systems like on HackTheBox or TryHackMe. DM me via Twitter (@FindingUrPasswd) to request any specific additions to the content that you think would also be helpful!

OSCP CheatSheet 2022 High-level notes for quick reference, scripts that may be useful for the exam (both my own and third party), tips/tricks & much m

Help the computer users protect their eyes from eyestrain, dry eyes, and myopia.

Eye-Protectors Feature ⇾ ⇾ 完整中文介紹請點這邊 ⇽ ⇽ How to install Windows : download the Eye protector.exe file here and execute it. Since the program is built

Analysis: [The Cryptic Impacts of Invasion: Functional Homogenization of Tropical Ant Communities by Invasive Fire Ants] Hello everyone! The goal of t 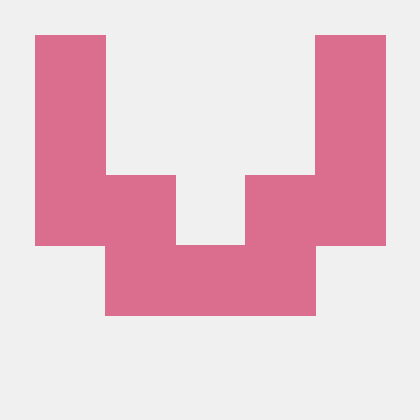